Because just a year before—give or take—there’d have been no place set for me at the table. I didn’t yet know any of them, while the people I did know were looking less and less familiar. It was as if I had cast off from the island of my own daily life, the figures on the shore growing distant as I drifted. No goodbyes. No map. Borne along the currents and crosscurrents of utter possibility. “You’re gonna love the new you,” I said to myself.

But it sounded strange because I didn’t really think of self-discovery as the thing that I was after. “No,” I replied, “not me. My search is for an understanding vaster, if less deep, wide-angled and miscellaneous.” I remembered reading somewhere how Hegel had said that the owl of Minerva takes flight at dusk, a line confirmed by even a quick look at the news. While contributions continued to be made to the advancement of knowledge, the sun was setting on our age of progress, or anyway that was the mood that carried me along as I found myself more and more in the audiences of lectures and symposia.

Really, it was strange how many. Current events, philosophy of mind, tort reform, you name it. I was omnivorous. Classes too: woodworking, meditation, but it was the lectures that really did it for me, and when, for example, a talk at the library on Fact and Fantasy of Aztec Ritual Sacrifice fell on the same evening as taekwondo, I shelved the dobok, without a moment’s hesitation, for the plumed serpent, the Great Pyramid of Tenochtitlan, the obsidian blade. I could sit there and watch anyone carry forth on any topic, regardless of whether I agreed or could even follow the line of thought, comforted by the speaker’s confidence, the warm embrace of expertise. During those months in the audience, I developed a little typography. There were just two types of lectures, I decided, or maybe two types of lecturers: those who want to unsettle our assumptions (problematize they would always say), and those who want to affirm them. The answer is more complicated than it seems, or else it is simpler. We squirmed in titillation when the man declared, “everything you think you know about drug addiction is wrong!” Ignorance is never so sweet as when it begins to erode. Then the next night, another man asked us if schools were killing creativity, and we all thought yes, surely they must be: we are born creators, dancers every one of us, stunted by the machinery of textbooks and tests. He said we were right, find your true self—it’s that easy. We got on our feet and danced.

The night in question, the speaker was a film studies professor from UC Santa Cruz, the subject the Theory of the Prequel. She was a problematizer. “If in the end, all is restored,” said the professor, “and things are again as things should be—our hero, having run the gauntlet through his world upended, will have managed to return that world, more or less to how it was at the beginning, just a bit better or a bit worse—and assuming all questions have been adequately answered in the unfolding and refolding of events, then all that remains to be asked is: what came before? How and when were these circumstances established anyway, those that we found in place at the start? A question of anteriority. Only this nags wrinkles into restoration’s finely folded swan napkin. Only this could ruin our evening. You see, the prequel is that most revolutionary of genres—politically speaking: it problematizes existing conditions. The specter of primitive accumulation.”

A man raised his hand and, when called on, began to speak about non-diegetic sound. “Do you have a question?” the professor asked. No one had told her that we are all film theorists in Los Angeles.

The next one called upon spoke of the Book of Eli, a post-apocalyptic film in which a lone man fights his way across America in order to protect a sacred book that holds the secrets to saving humankind. Eli turns out, in the end, to be blind, his book printed in braille. “Do you think the prequel should address how he lost his sight?” The professor admitted that he had not seen the film; it was neither a prequel nor an installment in a series with a prequel or prequels. A gasp ran through the crowd, and members of the audience jostled to recount the story, shouting out corrections and missed details. I watched the professor’s face as the room roiled in an atonal chorus. She slumped back, her little donuts glazed over, and I slipped past screaming film buffs, up the aisle and out the door.

Emerging into night, I heard footsteps coming up quickly from behind. “What’s the hurry?” It was a man’s voice, and I assumed the question couldn’t possibly be for me. I was walking a perfectly leisurely pace. Perhaps he was wondering aloud about his own haste—you hear that kind of thing a lot. But a moment later, he was beside me, walking in step, staring at me expectantly.

“Were you at the lecture?” I asked.

“You look like a man running from his own prequel.”

I turned my gaze from his as if to demonstrate that—by looking forward—I was, in fact, someone who knew what lay ahead, but the comment stuck in mind and I brought it up again a few weeks later, as I examined the blistered surfaces of his vessels.

“Huh? Oh that. I was just making fun of that guy going on about prequels,” he said in his gruff monotone.

“You didn’t find the lecture interesting?”

“I don’t care about that shit.”

“So why were you there?”

This was now the third or fourth time that we’d met up since he approached me that night. I’d agreed finally to come look at his kiln, and it now occurred to me that this pale, phlegmatic potter, Patrick Jackson—the name, I was certain, was false—had a something pornographic about him. He had sunken eyes and spoke in a low monotone and he was, like a creature out of a gothic tale, all sex and death. I wondered if he would touch me.

“What did you do to her?” I asked in a shaky whisper, but he didn’t respond.

“Listen,” he finally said, “you’ve been looking in the wrong places. What do you expect to get from these lectures at the library? The real answers are always inarticulable. You gotta see my pits when they’re ablaze.”

I glanced down at the trio of large cylindrical containers at our feet. He’d been telling me about these things for weeks. “My pits,” he always called them. “Just wait til you see my pits.” They were ceramic vessels with a strange, captivating skin—craggy, almost ulcerous in places. And each contained within it a slightly smaller pot.

“What are the smaller ones for?” I asked, struck by the contrast between this agitated crockery and Patrick’s steely vampire stare.

“They are pregnant,” he said. “Pregnant with themselves.” Even as I tried to take in his answer, I found my attention drawn queasily back into those pits, festering, chafing and charred. “They model the process of artistic creation,” I heard him say. “To make a work of art is to birth yourself in miniature. But while the birth of a child is a genetic collaboration, true artistic creation can only have but one parent. It is the expression of a solitary mind. It springs fully formed from the father’s loins.” My head swam with the stench of smoke and I would have sworn a rash was spreading all over me. “A child is born of water. Art is born of fire!”

I felt Patrick’s icy grip take my face and turn it toward his. I hadn’t realized I had doubled over. “EMF,” he said. “Extreme Mystic Fire.” 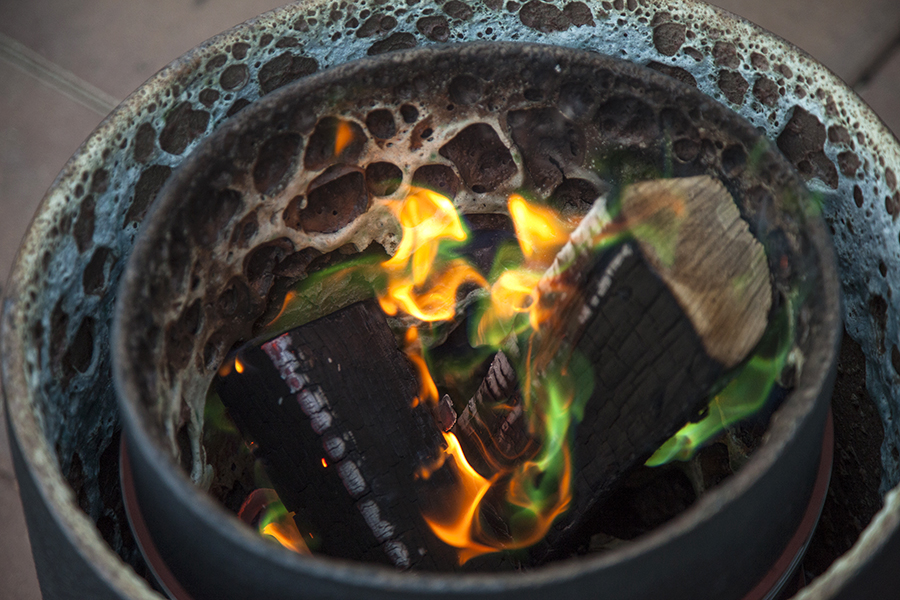 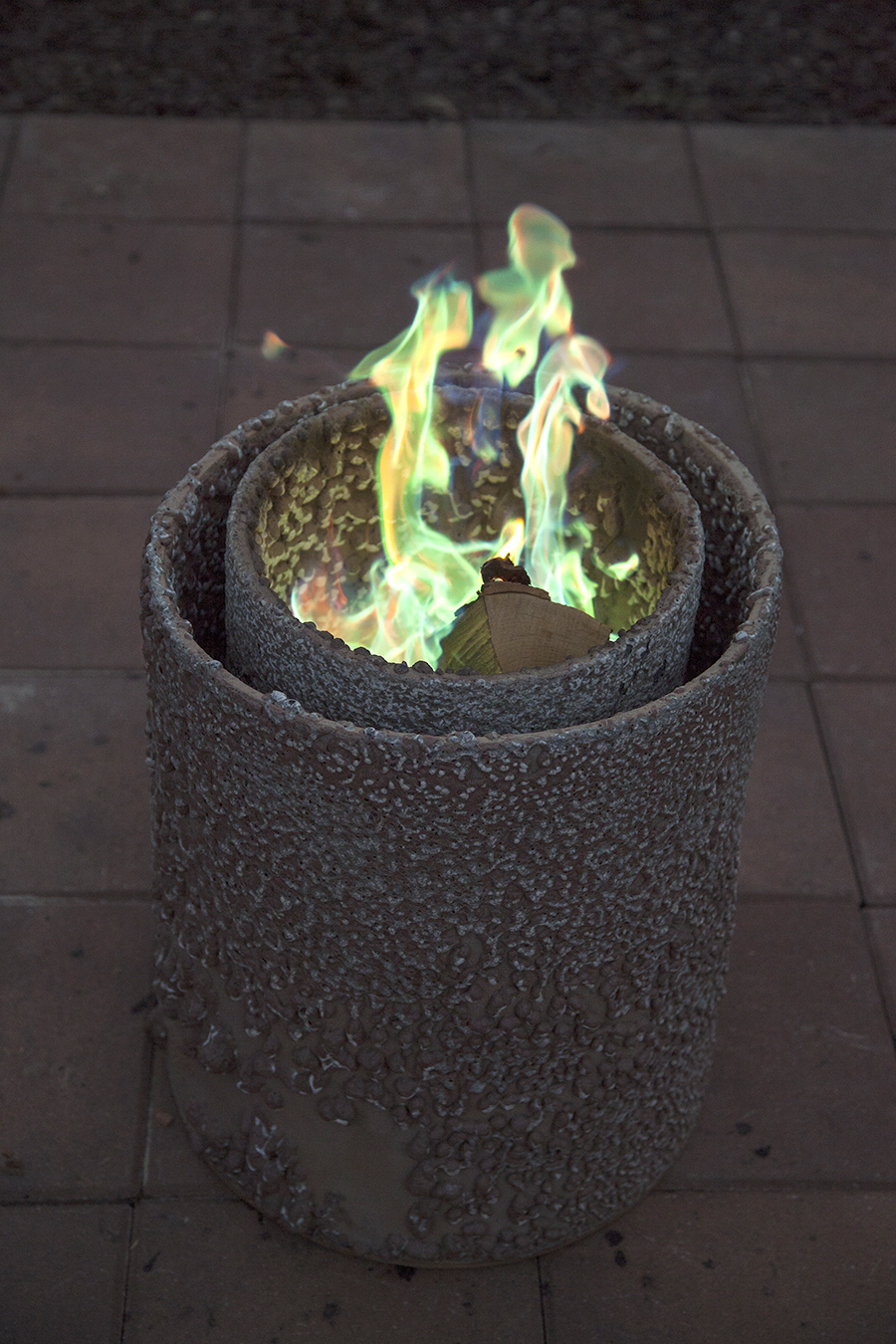 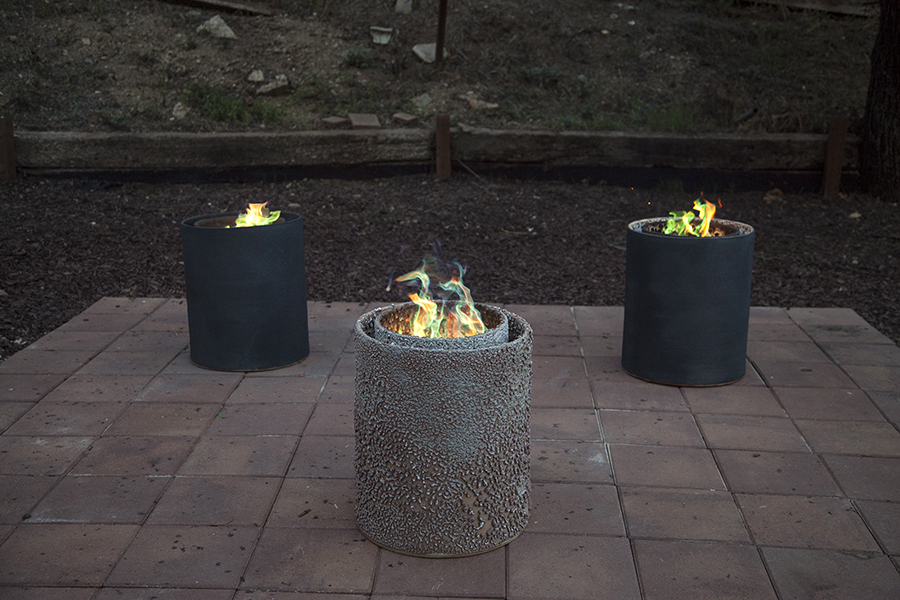